Review: War of the Planet of the Apes 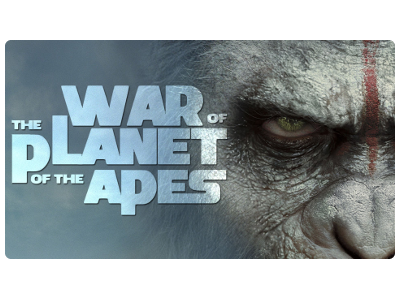 For about 45 minutes, I was completely engrossed and awed by this film. There were some obvious strengths going on: amazing imagery, exciting action, great pacing, sacrifice, emotion, tension…everything I want from a war drama. The forest setting of the ape home, with the shots behind the waterfalls and on the cliffs, were seriously some of the coolest shots in any movie I think. I was completely pulled in by the atmosphere created by this imagery, and was completely along for the ride.

There was something else pulling me in even further, though, but I couldn’t quite put my finger on it. It wasn’t until reflecting a bit that I think it has to do with the uncanny juxtaposition of apes playing out human roles and stories while retaining their ape look (another technological marvel) and many of the mannerisms and behaviors that I recognize as being apelike. But it isn’t uncanny in the sense of being uncomfortable or unsettling.

There was a great balance here, between what I was familiar with and what was foreign. Those things alone, human relationships and emotions atop ape mannerisms and visuals, created enough comfort of the familiar that when you combined them, it was just weird enough to be compelling but not turn me away.

It made me think of something I heard Brandon Sanderson talk about in his great series of lectures on Youtube about writing: the Strange Attractor. He completely borrowed the concept from a screenwriting essay by Terry Rossio. In short, it’s a concept that claims that a successful story should mix the unique and strange with something more familiar. (This definition comes more from Sanderson’s explanation than Rossio’s essay.)

The War of the Planet of the Apes pulled this off perfectly for me in the first act. When combined with the setting, visuals, and great acting (carried by Andy Serkis), I was ready to leave the theater thinking this would be one of the greatest movies of the year.

Then it all fell apart.

I wouldn’t say that the rest of the movie tarnished that first act, but I did lose nearly all of my engagement in the story and the characters that this Strange Attractor simply didn’t have enough of a pull to hold me in. There are a few things I can highlight that really caused me to lose interest.

One would be the scope of the story. This is maybe the consequence of expectations set up by the title and the trailers. The title implies that this is the war, the ultimate battle between apes and humans. The trailer did its best to promise this as well. But, as we eventually learn, this simply isn’t in the cards for the story. A more accurate title would be A Short Battle Between Small Factions Hardly Involving the Apes on the Planet of the Apes.

Our primary human antagonists were a small military unit that did not represent humanity, and Caesar led a similarly small band of apes that may or may not have represented their own kind. I wasn’t too sure about that. Either way, these two factions didn’t even go to war. They didn’t even battle! The movie turned into a poorly-plotted POW escape heist as the humans prepared to fight…other humans.

It wasn’t just failed expectations that caused me to lose interest in the final acts of this movie. Had the primary antagonist turned out to be compelling and complex, with enough charisma and a compelling reason for this entire military unit to turn against their own kind–at a time when humanity is going extinct–then I may have stayed engaged in the story. But unfortunately, I just had no reason to believe The Colonel’s actions and behavior except to think he was maybe just a bit unhinged. Why did these other people follow him? Not a single one of them seemed to have any sort of moral, ethical, or practical opposition to him just turning into a warlord and deciding to fight the rest of humanity because…disease?

Beyond that, his actions and tactics made little sense to me. He wouldn’t feed the apes, being used for slave labor, because…reasons? It’s simple logic that if you starve your slaves to death, you will no longer have slaves. He kept Caesar among them for similarly confusing reasons. He had them build a wall for more half-baked reasons. The force he was preparing for had an air force, so I am really not sure what good the wall was supposed to do, but I guess his strategy was just to fight for as long as possible before they all died. And for being paranoid about this highly contagious disease, he was certainly quick to handle a mysterious bloody doll and even bring it back to his living quarters.

The other biggest reason I lost my interest was just that the escape plot was not interesting or unique at all. There was a system of tunnels under the base. They dug out through the tunnels. Somehow, the guards didn’t notice all of this extremely activity going on. That’s about it. And in the end, it wasn’t a war with the apes that took out the humans, it was an avalanche. The apes just happened to survive it.

This movie did not depict a war, it didn’t show a grand finale to the human race, it didn’t explore any unique or complex dynamics of the human side of this story, and even the ape side fell into unbelievable motivations and actions. (Why should I believe that Caesar can’t let go of his plot for revenge in order to save his entire tribe?)

There were some enjoyable aspects beyond the amazing first act, like the comic-relief Bad Ape, the performance by Andy Serkis, the visuals and technology used to depict the apes, and that big orangutan Maurice.

But ultimately, there is something even more disappointing to me about having such an amazingly executed first act with a compelling cocktail of ideas to only flub in the last acts, than if it was just lackluster throughout. And there is one major rule that plays into how much I enjoy these big popcorn blockbusters: if you make a promise, you must deliver. If I go to see War of the Planet of the Apes and I don’t see a war of the planet of the apes, something is wrong.