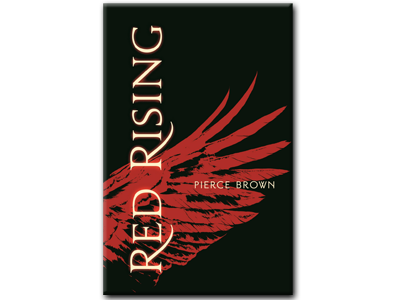 Part II is titled “Reborn,” which is quite on the nose. Not only does Darrow “come back from the dead,” he is completely and literally transformed in the subsequent chapter. Here we are introduced to the resistance movement, the Sons of Ares. We first meet Harmony and Ralph, who scoop him but after he wakes from his drug-induced unconsciousness. It is never fully explained, but I’m assuming that the drugs his uncle gave him simulated death, and Narol obviously didn’t pull on Darrow’s feet to break his neck.

Harmony and Ralph take Darrow to a man named Dancer, who seems to be a significant leader within this resistance movement. Dancer seems to view Darrow only as a tool, an object that can help them in their revolution. He’s not a man who watched his wife die and had his life taken from him; he is a means to an end.

We quickly learn that Darrow and the other lowReds have been lied to about the state of the planet. Believing that they were sacrificing so that Mars could one day be terraformed to be inhabited by humanity, they are completely unaware that Mars has been terraformed for some time, and there are sprawling, densely populated cities on its surface. This is sort of a Neo-waking-up-from-the-Matrix moment for Darrow. I would definitely add The Matrix to the list of very close comparisons for this book now. Darrow’s death was essentially a red pill moment, and now Darrow has discovered the world beyond the shadows on the cave walls. The lie obviously stuns him. But as with everything in this book so far, we don’t dwell long on his shock.

We quickly dive into the plan for Darrow hatched by Ares, the mysterious leader of the Sons of Ares. He is taken to an “carver” named Mickey who is given the task of transforming Darrow into a Gold. In this way he is completely transformed physically. In this world, cosmetic surgery has developed into a completely seamless endeavor. Mickey essentially builds a new body for Darrow, from his skin to his hair to his muscles to his eyes. The only thing that really seems to remain intact is his mind.

We get a bit of backstory through Mickey that I thought was quite interesting. He is from the artist caste of this society. Apparently, this caste is given psychedelic drugs from a young age to help develop their artistic senses. He does not get very descriptive about his childhood or background, but it’s clear that he has psychologically suffered from being forced to take these drugs. It seems each of the colors below the Golds seem to suffer in unique ways in order to be forced into their role in society.

This whole portion where Darrow undergoes surgery and learns about the life and culture on the surface of Mars seemed to drag for me just a little. Luckily, Brown’s style of storytelling is concise and straight to the point. There is very little fluff of flair. The story is always moving forward. But here, there was not much conflict, not much at stake. We are experiencing this new world through Darrow’s (transplanted) eyes, but it all seems rather straight-forward. We get some compelling interactions between Darrow and Mickey, Harmony, and Evey, Mickey’s Pink assistant, but nothing really kept me engaged with the story itself in this section.

I did find it interesting that in this new world kept secret from the lowReds, society didn’t seem to be as neat and clean as one would expect from such a rigid caste system. There were slums, dangerous districts in these towns, clubs, brothels, and everything one might expect from a regular city in real life. It makes me question why exactly the lowReds are kept in the dark. Firstly, what is the Society doing with all of the minerals they are mining? And secondly, would the Society not be able to enforce the caste system with the truth revealed? It seems equally troublesome to keep up the lie than it would be to just force the lowReds to stay in their caste, as all the others on the surface seem to do.

Soon after his transformation, Darrow takes the exams for entrance to the Institute, where he will be trained as a Gold to be Peerless Scarred. He excels at his test and gets into the school without issue. We meet some new characters as he departs for the Institute, some Golds who have varied and interesting personalities. We see in this section that while the Golds are all of the same caste, they are still individuals. There are even castes within the Gold caste, Pixies and Bronzes, who are looked down upon by other Golds for various reasons.

Upon arrival, Darrow undergoes another series of tests and batteries by the houses to determine where he’ll be placed – add Harry Potter to the list of influences. After the tests, there is a draft by the houses. Darrow is picked fifth (out of one thousand) by House Mars. We get some more interaction with other Golds in a dining hall, humanizing them some more.

That night, we learn what the final test is, what has been called the Passage. They abduct Darrow in the middle of the night and strip him in a bare room with one of the Golds he met earlier, Julian. He was a very amiable person who broke the image of ruthless Golds for me, which was likely an intentional choice by Pierce Brown, because him and Darrow are then forced to fight to the death for their spot at the Institute. Darrow realizes that this is more of a sacrifice than a fight, because there is no way Julian would be able to defeat him in combat. We end with Darrow brutally attacking Julian.

The consistent theme in this section seemed to center around how the characters’ views and behaviors are all affected by their placement in this very rigid caste society. Dancer is cold and detached, a necessity formed by his struggle to bring down this empire. Harmony and Darrow share a similar rage, a result of the injustice inflicted upon them by the Society. Mickey is a bit deranged viewing Darrow as a piece of art that he works on. The Golds seem to have their own troubles and pressures within their own removed world. All of these things seem to come from the characters’ place in society.

The Roman theme is played up very strongly here as well. It seems that Brown wanted to invoke the decline of the Roman empire in the Society, with the welcoming speech for the Golds speaking of the conditions of the rise of the Society type of decadence that causes a fall, naming such mentality as the ultimate enemy of their civilization.

There is a similar theme in all of the types of “youngish” adult novels like this, dividing people up based on their personality traits and being sent to a type of school or undergoing training. It seems to me that, in this case, it kind of represents how a lot of how we are integrated into society is predetermined for us by others. It’s like the caste system in the Society is a macrocosm of how the houses work in the Institute in microcosm. The theme of having a top-down enforcement of societal roles and positions with limited opportunity for deviation is very heavy here. I get the sense that Brown has some very strong opinions on the role of the state in governance.

Ultimately, all of these sorts of themes seem quite familiar, almost to a point of being played out. But the setting and prose of Red Rising help keep these very-familiar themes fresh and interesting. I’m looking forward to seeing how Darrow begins to relate to and identify with the Golds, what sort of training he undergoes, and how he maintains his connection with his lowRed origins. Will he return down to the mines? Will he stay in touch with Dancer and Harmony? And what is the Sons of Ares’ ultimate plan?

I predict this section was probably the slowest in the book, with a lot of exposition and little action. I wasn’t exactly bored, but I’m excited to dig into the plot now that Darrow is in the Institute.