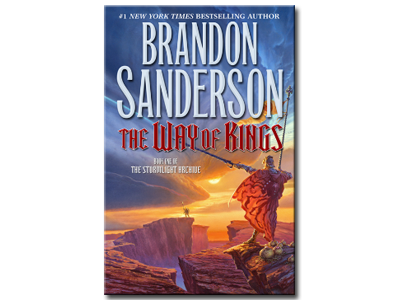 Shallan’s chapters continue to serve as a vehicle for Sanderson to deliver exposition and backstory. I do think it’s clever to have a story focused around the study of history, religion, and philosophy in order to help build the world, but I think the risk here is that such a story could get a bit stagnant. Many writers talk about the necessity of “forward motion” in storytelling—ensuring that the reader feels as if the story is moving and going somewhere. I wouldn’t say that Shallan’s chapters don’t achieve this, because plenty does happen.

But at this point, I am feeling like her story is suffering from stagnation a bit. I think there are two primary contributing factors in this: the fact that everything is taking place in the same city (really in the same few rooms), and that there are only four real characters here (three if you don’t include the king, who is barely present). This already feels like a risk for a slow-feeling plot, but adding in the fact that there is so much exposition covered in these chapters elevates that risk.

Even so, there is plenty to discuss here. As far as backstory goes, we learn more about King Galivar and his growing fascination with the Parshendi, his expeditions in the Unclaimed Hills, and a mythical city of Urithiru. Sanderson is really building up a mystery here. What was compelling Galivar? What even are the Parshendi? And how much of the mythology of this culture is actually the truth?

Aside from the backstory exposition, this is probably the most eventful section for Shallan so far. She has a personal crisis when Kabsal professes a sort of love for her, admitting that he’d be willing to give up his profession to go home with her. How much of that is the truth, given what happens with the poison soon after?

Shallan accidentally draws the mysterious creatures again and panics, rushing away to her room. I really like the idea that Shallan’s drawing ability is mostly unconscious, and so she is perceiving these creatures in her mind’s eye but not her physical eyes. I don’t fully understand what happened to her after she ran to her room and reached out to feel one of the creatures, heard the voice, and had a vision (or was actually taken to) a mysterious dimension. It seems to be related to Soulcasting though, as she immediately Soulcast her glass goblet into blood upon returning, and then attempted to cover her tracks by cutting herself. Oh, and one minor detail that seemed to just fly by—she apparently has a Shardblade…

Later, after she is taken to the King’s hospital and cared for, Jasnah and Kabsal visit and, after Shallan nearly becomes collateral damage in an attempt on Jasnah’s life, we learn that Kabsal is actually an assassin. I wonder how many answers we’ll get about him now that he became a victim of his own attempt. His assassination plan was rather clever, though things don’t seem to quite add up given that Jasnah actually ate the bread that was poisoned, yet suffered no effects. It seemed that Sanderson very intentionally focused on Jasnah’s reaction to the bread. In typical Sanderson fashion, I’m sure there’s more to the story.

How much more time to we have to bring any resolution to Shallan’s story at this point? It seems that a lot of this book so far is setting up a larger story for Shallan in the coming books, considering there have been mysterious aspects of her past revealed quite late. She is ashamed of something she did in the past, she has a Shardblade, she sees these mysterious beings, she has tapped into a power to Soulcast. Her relationship with Jasnah seems irreparable at this point, yet she lost the Soulcaster, so she can’t return home with any success. What is to become of Shallan and her family? Seems like we need another book just to answer that question.

With Kaladin’s chapters being split between flashbacks and present-time, not as much happens for our bridgecrew leader Kaladin. He does have a mysterious dream or vision of being a highstorm, hearing mysterious voices. It seems similar to Dalinar’s visions almost. We get a few ominous bits from this vision, particularly: “The Oathpact was shattered.” From the prelude, it seemed the heralds felt that they were finding some loophole in the Oathpact, but perhaps that will backfire.

We learn a bit more about one of Kaladin’s crewmates, Sigzil, who is a Worldsinger. He reminds me a lot of Sazed from Mistborn, both in his demeanor and his life’s purpose (preserving and sharing knowledge). Kaladin also gets a parshman as a new crew member, which is an interesting development. Then, subsequently, Kaladin begins the training of his crew. I am a bit confused as to how this will all play out, given the high casualty rate of bridgecrews. I expect some setbacks and difficulties along the way. Because nothing ever seems to go as planned with Sanderson, I doubt they’ll end up fighting their way out (though I would like to see it).

The real meat of Kaladin’s chapters were his flashbacks. We get a rich and tragic story told in bits and pieces. We see clearly just how much Kaladin cares for Tien, and how naïve and innocent Tien really is. It reminds me a bit of Syl, who almost seems like a replacement for Tien in some ways. She is innocent and naïve in her lack of awareness and knowledge.

Roshone manipulates the rules to take Tien away from Kaladin’s family to serve in the army, a crushing blow for his father. Kaladin volunteers to go with him in order to protect him. His decision about whether to be a soldier or a surgeon seems to have been made for him.

I thought it was really cool to see Cenn’s chapter from the beginning of the book from Kaladin’s perspective. We skip around some, not learning more about Tien’s death; I hope we get more on that later. But to learn what happened in that first battle with the Shardbearer was fascinating, and to learn what happened afterwards was heartbreaking. I was bit frustrated by Kaladin’s choice to not take the Shardblade, but I suppose I understood it. He was completely disillusioned with the brighteyes at this point and I can understand him not wanting anything to do with them. But it is a Shardblade. He could have taken it and still shirked his obligation to any social inequalities.

But he probably regrets not making that decision after his crew was killed by Amaram. This was a great scene, very gut-wrenching. We knew that Amaram had to have done something horrible, a betrayal that landed Kaladin in slavery, but this scene helps explain just why Kaladin is so damaged. His actions, again and again, get his closest friends killed. I loved everything about these flashbacks.

I have to be honest, I didn’t understand the first interlude with Baxil and his mistress. It was fun and great writing, but maybe a bit too confusing. We have no sense of what they’re doing by destroying that art.

The second interlude with Geranid and Ashir was great though. It was really cool to see a sort of scientific process from the religious order, attempting to learn the nature of the spren. And it’s clear that Sanderson took inspiration from quantum physics in his description of the spren, particularly the uncertainty principle, and the double-slit experiment results showing that measuring a quantum event innately changes that event (my poor layman’s explanation). I liked the characters and everything they were doing.

Then Sveth’s interlude…I would really not mind having more of this in the book. It is brutal, exciting, and heartbreaking. Sveth is unwillingly plunging the world into chaos with his incredible skill of murder on a grand scale. The kind of Jah Kaved is dead. What will that mean?

Betrayal! That’s the biggest theme I find in this section of the book. Kabsal betrayed Shallan and Jasnah, killing himself in the process. Amaram betrayed Kaladin in a grand way. I think one thing I love about Sanderson’s writing is how things are basically never what they seem, and betrayal is almost inevitable, yet he hides it so well. Of course we knew that Amaram betrayed Kaladin since the beginning of the book, but I didn’t fathom just how brutal that betrayal was. And I honestly did not see Kabsal’s betrayal coming. Was he purely manipulating Shallan? Was anything he said he felt about their relationship genuine? He did seem to quickly and conveniently fall in love with her.

My questions are all about those larger forces. Who is compelling Sveth? What is behind the highstorms? What are the figures Shallan sees? Where did she go in her vision? What is happening to Kaladin?

Things are ramping up and I’m excited for what lies ahead, but I also have a sense of sadness in knowing now that these answers will probably not be forthcoming in this book, or even the next or the next.